Would you invite to your house an observant Jew whose diet is according to strict kosher laws and then offer him or her a meal including items such as shrimp cocktail, lobster bisque, and honey-baked ham? Of course you wouldn’t, unless you intentionally want to offend. The dietary laws recorded primarily in Leviticus strictly prohibit eating pork and seafood with a shell.With that in mind, let’s turn first to this week’s lectionary passage from the book of Acts:

Now the apostles and the believers who were in Judea heard that the Gentiles had also accepted the word of God. So when Peter went up to Jerusalem, the circumcised believers criticized him, saying, “Why did you go to uncircumcised men and eat with them?” 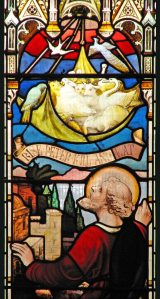 Then Peter began to explain it to them, step by step, saying, “I was in the city of Joppa praying, and in a trance I saw a vision. There was something like a large sheet coming down from heaven, being lowered by its four corners; and it came close to me. As I looked at it closely I saw four-footed animals, beasts of prey, reptiles, and birds of the air. I also heard a voice saying to me, “Get up, Peter; kill and eat.’ But I replied, “By no means, Lord; for nothing profane or unclean has ever entered my mouth.’ But a second time the voice answered from heaven, “What God has made clean, you must not call profane.’ This happened three times; then everything was pulled up again to heaven. At that very moment three men, sent to me from Caesarea, arrived at the house where we were. The Spirit told me to go with them and not to make a distinction between them and us. These six brothers also accompanied me, and we entered the man’s house. He told us how he had seen the angel standing in his house and saying, “Send to Joppa and bring Simon, who is called Peter; he will give you a message by which you and your entire household will be saved.’ And as I began to speak, the Holy Spirit fell upon them just as it had upon us at the beginning. And I remembered the word of the Lord, how he had said, “John baptized with water, but you will be baptized with the Holy Spirit.’ If then God gave them the same gift that he gave us when we believed in the Lord Jesus Christ, who was I that I could hinder God?” When they heard this, they were silenced. And they praised God, saying, “Then God has given even to the Gentiles the repentance that leads to life.” –Acts 11:1-18 NRSV

Peter was an observant Jew, and he was criticized for eating with Gentiles who had believed the gospel message of Jesus. Those men were uncircumcised and considered ritually unclean by circumcised Jews. And it was assumed Peter had shared a “gentile” (non-kosher) meal with them, although that’s actually an assumption on our part. Merely sharing a meal was, in itself, bad enough and if Peter had consumed non-kosher food would have added insult to injury.

The details of associating with Gentiles merely provide the pretext for what’s most important here: With this passage in Acts, the gospel-writer Luke offers a key moment in the spread of the good news of Jesus Christ. This message is not just for the Jews but for Gentiles, as well. Shocking, to say the least.Of course, it’s not simply a case of Peter giving this issue some thought and proceeding according to what he felt would be a good idea. No, the key part of this passage is a vision in which a heavenly voice (the Holy Spirit?) tells Peter what God wants him to do and why. In the end Peter’s critics are silenced once they accept that God’s love extends beyond the Jews to the Gentiles, indeed to all the world.

Peter’s vision as recorded in Acts 11 is helpful to us some 2,000 years later. First of all, God can and will do a “new thing” from time to time. Second, it reinforces how I read and understand scripture: to view the individual parts within the lens of what I believe is the overall theme and purpose–That God is and will always be faithful to God’s promises to bless the earth and everything and everyone in it.

Now let’s add in the Gospel lection from John:

Change is inherent in all creation, including, of course, the story of humankind. It’s how we handle that change that matters. Jesus gave his disciples at that last supper a new commandment, to guide them and us: Love One Another. That’s how we handle change. That’s how we deal with new situations. That’s how we move forward toward the reign of God on earth as it is in heaven. Nobody promised that it would be easy.

And yet, there are many who profess to be Christians who are all about separating “us versus them.” They want to build walls, not only the physical kind but social, economic, class, and racial ones, as well. It’s almost as if they proclaim, “God loves us, so we love one another. But the rest of you guys, forget about it!”

The Easter season (yes, we’re still in it, at least according to the lectionary) moves on toward Pentecost, Those first Christian faithful had no idea what was about to take place. We don’t know what’s coming next, either, but as faithful disciples of the risen Christ, we turn with hope to the future.

*Portions of this were adapted from a previous ForeWords blog post.

My most recent book, Speak to the Bones: How to Be a Prophetic People in a Time of Exile, is up on Amazon in both print and e-book formats:  161-page Book ; Kindle e-book. The ancient Hebrew prophets can serve as guides for modern-day prophetic communities to engage in actions for peace and social justice. Each of the 10 chapters includes questions for reflection and discussion, making this great for class use. My previous book What Was Paul Thinking? is also available on Amazon in both print and Kindle e-book editions.</emnbsp;

Rich Brown is a writer, blogger, editor, and publisher. His most recent book is "Speak to the Bones: How to Be a Prophetic People in a Time of Exile" (Isaac's Press).
View all posts by Rich Brown →
This entry was posted in Ancient Israel, Apostle Peter, Easter, faith, faithfulness, Holy Spirit, hope and tagged Acts, Gospel of John, lectionary. Bookmark the permalink.