January 6th was originally celebrated by Christians as the birth of Jesus. That changed for the Western Church in the year 325 when Emperor Constantine designated December 25th as Jesus’ birthday. That day was, not coincidentally, the day of the Sol Invictus, the Unconquered Sun, whom he worshiped. January 6th became associated with Jesus’ baptism.

The story of the Magi from Matthew’s Gospel is typically celebrated on this day, as well. It’s worth noting that our popular view of the Magi (Christmas card depictions and the traditional carol, “We Three Kings of Orient Are”) is quite different from what Matthew actually wrote in his account. In the biblical account, these visitors to the baby Jesus were neither kings nor “wise men.” Rather, Magi is the plural form of magoi, which is a Greek word for Zoroastrian priests from Persia. It’s apparent Matthew wants his readers to know this new “king of the Jews” is recognized, first of all, by Gentiles and, secondly, by Persians, who represented the other great world power of the time. The Magi represent the first gentile missionaries! Furthermore, Herod was an Idumean convert to Judaism so he could gain the backing of the Romans. No wonder he feared the idea of an actual king within Judaism. 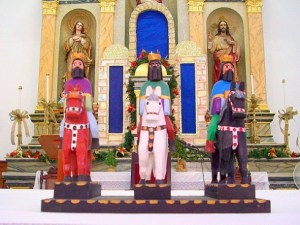 This day has special significance for the people of Puerto Rico, who celebrate it with great festivity as Los Tres Reyes (Three Kings Day). Businesses and schools close. Historically, this was the only “holiday” Afro-Caribbean slaves on the island were given. Not surprisingly, the depiction of a black king (Melchior) is generally put front and center.

Here’s a link to a previous ForeWords blog on this week’s lectionary readings (in which I make a connection, albeit tenuous, between noted American poet Henry Wadsworth Longfellow and myself):

My most recent book, Speak to the Bones: How to Be a Prophetic People in a Time of Exile, is up on Amazon in both print and e-book formats:  161-page Book ; Kindle e-book. The ancient Hebrew prophets can serve as guides for modern-day prophetic communities to engage in actions for peace and social justice. Each of the 10 chapters includes questions for reflection and discussion, making this great for class use. My previous book What Was Paul Thinking? is also available on Amazon in both print and Kindle e-book editions.</em

Rich Brown is a writer, blogger, editor, and publisher. His most recent book is "Speak to the Bones: How to Be a Prophetic People in a Time of Exile" (Isaac's Press).
View all posts by Rich Brown →
This entry was posted in Christian theology, Christmas, Epiphany, lectionary and tagged Gospel of Matthew, Isaiah. Bookmark the permalink.