Politics, especially before, during, and right after an election, has become something of a contact sport here in the USA. Which is to say, it’s usually not a question of policies and an honest debate about solutions to our growing societal problems. Instead, it devolves into fake news, so-called “alternative facts,” knee-jerk partisanship, and macho posturing.

Way back in the early days of NBC’s “Saturday Night Live” there was a recurring skit about a couple “bodybuilders” (my apologies to actual bodybuilders; I use that term very loosely here because they obviously weren’t really into building muscular physiques; there were just a couple overly macho simpletons trying to bully others). 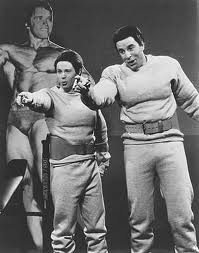 SNL’s Hans & Franz just want to ‘Pump You Up,’ you girlie-man

Hans and Franz, with their signature taunt of “girlie-man,” come to mind a bit too easily right now, I’m afraid. Apparently, no politician wants to be seen as anything but strong, decisive, courageous, bold, and, well, “manly.” A few elections back some female politicians took to demanding that certain of their male counterparts should “Man up!” Frankly, I don’t recall the full context, just the silliness of it all. It was one of many cheap political ploys to get a quick headline in our 24/7 news cycle.

Yet “Man up!” is a perfectly good rhetorical flourish. “Manning up” means to do the right and honorable thing. As such, there is at least a measure of nobility involved. It is, of course, a male-centric comeback and arguably sexist, although I could fill the rest of this blog post with pros and cons on that and still not sway anybody’s opinion. So I’ll just leave it at that. In the end, of course, nobody ever wants to back down, much less be the first to attempt any kind of reconciliation.

“Man up!” is related to the more generic “Grow up!” of which we’ve all probably been the recipient at one time or another. I don’t have perfect recollection of my childhood years but I’m certain my older brothers aimed the taunt at me on more than a few occasions. As for my parents–probably them, too, although far less often than my brothers. No doubt others can recall coaches and boot-camp drill instructors covering this same territory, perhaps in more colorful ways.

Be that as it may, I’m going to segue to the task at hand and note that all four biblical writers this week address this general topic: three of them directly; you have to read between the lines a bit for the psalmist. Not surprisingly, Apostle Paul is most direct:

And so, brothers and sisters, I could not speak to you as spiritual people, but rather as people of the flesh, as infants in Christ. I fed you with milk, not solid food, for you were not ready for solid food. Even now you are still not ready, for you are still of the flesh. For as long as there is jealousy and quarreling among you, are you not of the flesh, and behaving according to human inclinations? For when one says, “I belong to Paul,” and another, “I belong to Apollos,” are you not merely human? What then is Apollos? What is Paul? Servants through whom you came to believe, as the Lord assigned to each. I planted, Apollos watered, but God gave the growth. So neither the one who plants nor the one who waters is anything, but only God who gives the growth. –1 Corinthians 3:1-7

This was a theme to which Paul had to return so the Corinthians would get the point. In one of his most familiar passages (when was the last time you didn’t hear 1 Corinthians 13 at a wedding?) Paul continues: “When I was a child, I spoke like a child, I thought like a child, I reasoned like a child; when I became an adult, I put an end to childish ways. For now we see in a mirror, dimly, but then we will see face to face. Now I know only in part; then I will know fully, even as I have been fully known” (vs. 11-12).

It appears there was considerable disagreement in the church as to whose ministry was most important, leading to jealous factions. Imagine that! Within the church there are those with gifts and skills as missionaries, others as pastors or teachers or money managers. Some minister well with children or youth or mature adults. If you’re lucky you’ve got somebody who knows how to fix a furnace on a winter night or create and manage a first-class website. Perhaps there is a lingering sense of loyalty to a former pastor, thus making it tough for anybody new (or younger) to make much headway. And then there’s the “We’ve always done it that way” crowd, which offers a pretty certain pathway to oblivion. 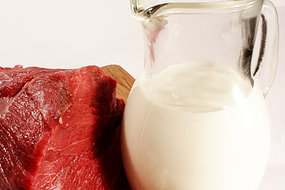 Paul couldn’t offer these Corinthians any spiritual “meat” because they were barely able to tolerate “milk.” But he knew that eventually they would. It would just require humility and dedication, for starters. He didn’t want them to remain “infants in Christ” forever, and the same can be said for us 21st-century Christians. Yet so many people today seem content to do exactly that. Some, it appears, start growing but eventually regress, finding discipleship too demanding, too all-encompassing, too restrictive of what they feel is a more attractive lifestyle. Browse the Christianity section of any big bookstore and you’ll have to wade through a lot of fluff and drivel before finding something of substance. In short, people reach a point of being satisfied with what they’ve got. They’re stuck and happy about it. Ignorance may be blissful but it’s also potentially dangerous.

Matthew shares some of Jesus’ most important teachings in chapter 5 of his Gospel. Coming directly after the Beatitudes (covered two weeks ago in the lectionary) and his sermon about salt and light (last week’s topic), Jesus now offers an extended discourse filled with “You have heard it said… but I say to you….” His method is often misunderstood by Bible readers, who think that Jesus is comparing opposites here: the Law as observed by the Jews and the Gospel to which he challenges his listeners. Remember that Jesus said he didn’t come to abolish the Law but to fulfill it.

With that in mind, consider what he said: You’ve heard it said, “Do not commit murder,” but I say, “Anybody who is filled with anger is open to the same judgment as a murderer.” I can feel quite satisfied with myself as I hear Jesus utter the first half of that; I’m quite confident I’ve never murdered anybody. But filled with anger? Uh-oh. Now he’s got me. 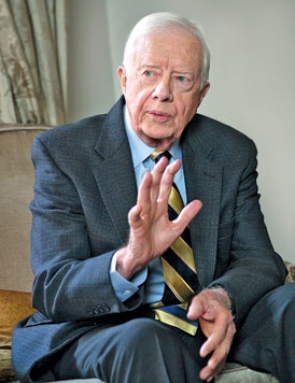 Years ago President Jimmy Carter caught a lot of grief when he admitted in a Playboy magazine interview that he “had lusted in his heart.” What Jimmy had, and what most of his critics didn’t have a clue about, was his familiarity with the second half of Matthew chapter 5. Unlike too many other noted politicians, Jimmy Carter had not committed adultery. But he held himself to a higher standard, trying to do exactly what Jesus had first challenged his listeners to do twenty centuries before. It echoes the psalmist’s words, as well:

Happy are those whose way is blameless, who walk in the law of the Lord. Happy are those who keep his decrees, who seek him with their whole heart, who also do no wrong, but walk in his ways. You have commanded your precepts to be kept diligently. O that my ways may be steadfast in keeping your statutes! Then I shall not be put to shame, having my eyes fixed on all your commandments. I will praise you with an upright heart, when I learn your righteous ordinances. I will observe your statutes; do not utterly forsake me. –Psalm 119:1-8

It all comes down to the kind of choice presented to the people of ancient Israel, as recorded in Deuteronomy. That choice is greater than just to be physically alive or dead. They were about to cross the River Jordan into their Promised Land, ending 40 years of wandering (and spiritual preparation) to settle down, to essentially “grow up” as God’s people, the chosen ones. There were no guarantees, just a covenant (and that’s a whole other thing, as the Israelites kept rediscovering over and over again). It is the same choice those of us who say we follow Jesus as his disciples face today:

I call heaven and earth to witness against you today that I have set before you life and death, blessings and curses. Choose life so that you and your descendants may live, loving the Lord your God, obeying him, and holding fast to him; for that means life to you and length of days, so that you may live in the land that the Lord swore to give to your ancestors, to Abraham, to Isaac, and to Jacob. –Deuteronomy 30:19-20

COMING IN FEBRUARY. My new book, Speak to the Bones: How to Be a Prophetic People in a Time of Exile, will be available on Amazon in both e-book and print formats. Kindle e-book edition now available! The experiences of ancient Hebrew prophets are presented as a guide for modern-day prophetic communities to engage in social-justice action. Each of the 10 chapters includes questions for reflection and discussion.

Rich Brown is a writer, blogger, editor, and publisher. His most recent book is "Speak to the Bones: How to Be a Prophetic People in a Time of Exile" (Isaac's Press).
View all posts by Rich Brown →
This entry was posted in Apostle Paul, Epiphany, reconciliation and tagged community, Gospel of Matthew, Hebrew Bible, Psalm. Bookmark the permalink.