We Christians do this every year: journey from Palm Sunday to Easter Sunday. Some folks take a shortcut, hopping from the Hosanna shouts of the first Sunday to the great Alleluias of the second, spending as little time or thought on what’s in between.

There’s a lot to that in-between time, though. Trouble is, it’s kind of messy, spiritually and theologically challenging, and–well, let’s face it–it all climaxes with Jesus being tortured, tried, and crucified. That can provide a challenging route for Christians who emphasize a gospel filled with joy, hope, love, and peace. It all belongs together, but that doesn’t mean there won’t need to be a whole lot of digging and head-scratching and struggling.

On the other hand, why should Holy Week be a breeze, a casual stroll through the life and times of Jesus of Nazareth? Consider, for instance, this brief passage from Mark’s Gospel: 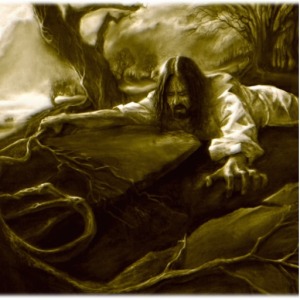 They went to a place called Gethsemane; and [Jesus] said to his disciples, “Sit here while I pray.” He took with him Peter and James and John, and began to be distressed and agitated. And he said to them, “I am deeply grieved, even to death; remain here, and keep awake.” And going a little farther, he threw himself on the ground and prayed that, if it were possible, the hour might pass from him. He said, “Abba, Father, for you all things are possible; remove this cup from me; yet, not what I want, but what you want.” –Mark 14:32-36 NRSV

Jesus clearly didn’t want what he saw coming his way. Throwing himself on the ground, he pleaded with God for some other way than what appeared before him in the coming days. “Yet, not what I want, but what you want.”

The principalities and powers were amassing their forces against him. The Roman empire. The entrenched religious hierarchy of Second-Temple Judaism. The fickleness of the crowds that one day happily shouted “Hosanna to the king!” and less than a week later were angrily urging Pontius Pilate to “Crucify him!” Even among his closest associates there would be a traitor and another who would deny even knowing him. Perhaps most inexplicable of all: the silence of God.

The Gospel writer Matthew relates the final words of Jesus, moments before his life ended while nailed to a cross: “My God, my God, why has thou forsaken me?”

Biblical scholars are quick (and correct) to note that those words are exactly those of Psalm 22:1. Some Christians take it a giant step further by claiming that the entire psalm is a direct prophecy/prediction of Jesus’ crucifixion. I find myself in the camp of those who believe Matthew drew on what would have been a familiar psalm to help explain, years after the fact, the course of events on that fateful Friday in Jerusalem. But what do we do with that word “forsaken?”

I’ve been practicing for a few week with my congregational choir in preparation for our Easter worship service. The music we’re singing includes arrangements of several familiar hymns. One of them is “Were You There (when They Crucified My Lord)?” This particular arrangement ends with the words, “Were you there when the Father turned away?” The first time we practiced I was uneasy with that theological statement, as were many others in the choir. Our unease soon caused us to find substitute words. Do we really believe that God “turned away” from Jesus at that moment? For starters, what does that say about God? And what might we infer about our relationship with our Creator?

Does the silence of God indicate that God turns away, especially when the going gets tough?

In his book on surviving the Nazi concentration camp Buchenwald(La Nuit) Elie Wiesel relates the story of being forced to watch the death by hanging of fellow Jewish prisoners:

“Then came the march past the victims. The two men were no longer alive. Their tongues were hanging out, swollen and bluish. But the third rope was still moving: the child, too light, was still breathing…. And so he remained for more than half an hour, lingering between life and death, writhing before our eyes.
And we were forced to look at him at close range. He was still alive when I passed him. His tongue was still red, his eyes not yet extinguished.

Behind me, I heard the same man asking: “For God’s sake, where is God?”
And from within me, I heard a voice answer: “Where is He? This is where–hanging here from this gallows….”

That night, the soup tasted of corpses.”
― Elie Wiesel, Night

We mistake the apparent silence of God for God’s apparent absence or, even worse, turning away. Although none of us can truly know God, but however shocking it may be to come to this realization grief may well be part of God’s nature. And so, when we grieve, perhaps we should view that as a reflection in microcosm of divine grief.

Seen in this light, our annual journey from Palm Sunday to Easter morning is more than ritual, more than a series of events. It is the way, the path, of Jesus and therefore the way for those who follow him as disciples.

Rich Brown is a writer, blogger, editor, and publisher. His most recent book is "Speak to the Bones: How to Be a Prophetic People in a Time of Exile" (Isaac's Press).
View all posts by Rich Brown →
This entry was posted in Easter, grief, passion week and tagged Crucifixion, Gospel of Mark, Hope, Psalm. Bookmark the permalink.