From the 2012 ForeWords archive:

There was a time when Christians argued among themselves quite a bit about baptism. There’s the “when” question: infants, children old enough to realize what’s going on, or adults? There’s the “how” question: sprinkling, pouring, or full immersion (with a subset issue: once or three times)? And there’s the “why” question: washing away sins, “reenacting Jesus’ death by crucifixion and resurrection from the [watery] grave, a public expression of an inward grace, or a recognition of becoming part of God’s kingdom on earth as it is in heaven. 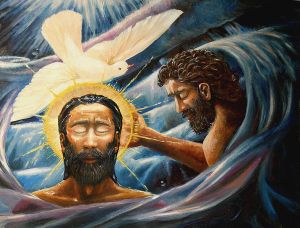 Ah, yes, the “good old days” of Christians arguing among themselves. At its basis, a question of who’s right and who’s wrong (or, if you prefer, who’s in charge and who’s not: orthodoxy vs. heresy).

Not that those days are over, of course–far from it. There’s a sizable group of Christians who maintain that physical baptism (by rightly authorized persons) is an absolute requirement to gain admission to a heavenly reward. It’s fascinating to me, at least, how so many of these standard baptismal arguments have such a disconnect with Mark’s Gospel account of Jesus’ own baptism by John:

John the baptizer appeared in the wilderness, proclaiming a baptism of repentance for the forgiveness of sins. And people from the whole Judean countryside and all the people of Jerusalem were going out to him, and were baptized by him in the river Jordan, confessing their sins. Now John was clothed with camel’s hair, with a leather belt around his waist, and he ate locusts and wild honey. He proclaimed, “The one who is more powerful than I is coming after me; I am not worthy to stoop down and untie the thong of his sandals. I have baptized you with water; but he will baptize you with the Holy Spirit.” In those days Jesus came from Nazareth of Galilee and was baptized by John in the Jordan. And just as he was coming up out of the water, he saw the heavens torn apart and the Spirit descending like a dove on him. And a voice came from heaven, “You are my Son, the Beloved; with you I am well pleased.” –Mark 1:4-11 NRSV

The story gets curiouser and curiouser once Apostle Paul’s experience in Ephesus, as recorded in Acts 19 is added to the mix:

While Apollos was in Corinth, Paul passed through the interior regions and came to Ephesus, where he found some disciples. He said to them, “Did you receive the Holy Spirit when you became believers?” They replied, “No, we have not even heard that there is a Holy Spirit.” Then he said, “Into what then were you baptized?” They answered, “Into John’s baptism.” Paul said, “John baptized with the baptism of repentance, telling the people to believe in the one who was to come after him, that is, in Jesus.” On hearing this, they were baptized in the name of the Lord Jesus. When Paul had laid his hands on them, the Holy Spirit came upon them, and they spoke in tongues and prophesied—-altogether there were about twelve of them. –Acts 19:1-7 NRSV

I can’t say I’ve ever personally witnessed such spiritual gifts as speaking in tongues and prophecy as part of either water baptism or the laying on of hands for confirmation. And it would be an easy route to follow that question back into good, old-fashioned Christian arguing about the validity of baptism/confirmation without those charismatic expressions. But let’s agree to not go there right now. 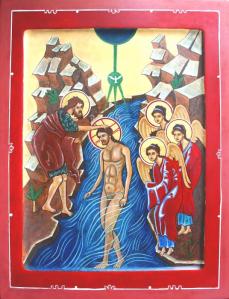 There is no one, simple, incontestable, “true” meaning for baptism. There’s a whole bunch. The same can perhaps be said for how you do it, too. Even my own denomination, Community of Christ, now permits individuals to join the church on the basis of previous water baptism but with confirmation by church elders (under rather strict guidelines, naturally). Such a policy would have been absolutely unthinkable a few decades ago.

Taken together, the sacraments of baptism and confirmation are acts of repentance, initiation into the church, a symbolic connection with the crucified and resurrected Christ, and an entryway into Christ’s peaceable kingdom on earth. Does it mean, therefore, that people who don’t see it or “do it” this way are forever outside God’s love and grace and protection? No. Who among us is authorized to place limits on what God does? As Christian tradition puts it, the Spirit blows as the Spirit wills to blow.

When I was eight years old I was baptized and confirmed. There’s a pretty big gap between what it meant to me way back then and what it means to me today. What it means at some point in the future, who am I to say at this point. And that, I think and believe, is how it should be.

Rich Brown is a writer, blogger, editor, and publisher. His most recent book is "Speak to the Bones: How to Be a Prophetic People in a Time of Exile" (Isaac's Press).
View all posts by Rich Brown →
This entry was posted in baptism, Epiphany and tagged Apostle Paul, Epiphany, Gospel of Mark. Bookmark the permalink.