From the November 2011 ForeWords archive:

Previously I wrote in this blog about a flurry of controversial plans to “rescue” the Crystal Cathedral, the Southern California megachurch founded by noted evangelical minister and possibility thinker Robert Schuller, from bankruptcy. The high-dollar dispute over who gets to buy the monumental church building and its campus was finally resolved this past week when a bankruptcy judge ruled in favor of the Roman Catholic Diocese of Orange. Cost: $57.5 million. 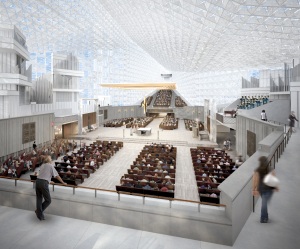 Artist’s rendering of the new sanctuary for the Roman Catholic Christ Cathedral (formerly Robert Schuller’s Crystal Cathedral), where the focus will become the celebration of the Mass at a central altar

That’s a lot of money at any moment, but especially so during the current tough economic times when there’s so much financial, economic, and social pain: hunger, homelessness, unemployment and underemployment, home foreclosures, mounting student loans held by jobless young adults, and the list, sadly, goes on and on. As well, there’s the question of how and why the Roman Catholic hierarchy is spending so steeply on a glitzy new cathedral (which will still need considerable renovations to change the interior space into an appropriate Catholic worship space) when its own child-abuse scandal continues on the front pages of most newspapers. (Here in Kansas City the Catholic bishop has now plea-bargained a two-year probation that requires him to appear monthly in a county prosecutor’s office to report on sex-abuse issues.) The Orange archbishop, however, contends his diocese has already settled all its cases involving child-abusing priests. Apparently, that makes it all okay.

“When the Son of Man comes in his glory, and all the angels with him, then he will sit on the throne of his glory. All the nations will be gathered before him, and he will separate people one from another as a shepherd separates the sheep from the goats, and he will put the sheep at his right hand and the goats at the left. 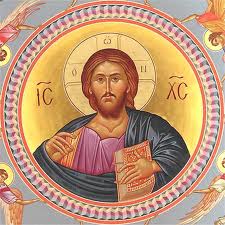 This parable is the high point and end-piece of Jesus’ teaching ministry, according to Matthew’s Gospel. In chapter 5 Jesus pronounces a blessing on the marginalized people in society and in chapter 25 he announces his presence in them. In this sense, Jesus has never left humankind and has been here all along. That, of course, raises all kinds of questions regarding his “second coming,” but those issues are for another time.

Here on the last Sunday of the Christian lectionary calendar, before we once more focus on Advent and then Christmas, we look at the biggest picture of all: the meaning and purpose of Christ. No wonder many Christian churches refer to this as “Christ the King Sunday.” 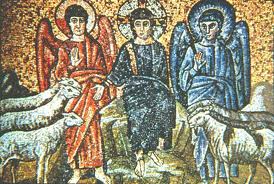 We simply can’t escape that Jesus has tied himself intimately to the thread that runs throughout both Testaments: what is often referred to as God’s “preferential option for the poor.” This leads us ultimately to Final Judgment.

Noted theologian Stanley Hauerwas, in his commentary on Matthew, writes, “The difference between followers of Jesus and those who do not know Jesus is that those who have seen Jesus no longer have any excuse to avoid ‘the least of these.'”

This “King” (and here I feel it’s necessary to note once again that a “human” term as this describing divinity falls far short of the goal, but it’s perhaps the best vocabulary we’ve got) isn’t anything like the kings and emperors and governments that rule this world. These marginalized ones receive blessing because they know “the One” who brings real peace, who sees the needy, and who hears the cries of the oppressed. In God’s reign of peace and justice (aka “kingdom”), no one is hungry, naked, sick, or alone. To bear witness to Christ as King is to be a messenger of this kingdom–not only in service to others but to profess that all things are in process of being transformed by God.

Naturally, we humans are tempted to decide for ourselves just who is a goat and who is among the sheep, forgetting that we don’t get to do that. Judgment is a divine activity, and here in Matthew 25 Christ functions as the Great Shepherd. Curiously, both sheep and goats have something in common: neither fully recognizes the presence of Christ in the poor, hungry, naked, and imprisoned. They both ask the same question: “When did we…?” The key is that one group acts out of compassion; the second group has other, obviously more important, things to do.

As is true in so many places in the Christian New Testament, this parable can lead us directly to numerous places in the Hebrew Bible. One of the most poignant is Isaiah 58:

“Do you call this a fast,
a day acceptable to the LORD?
This, rather, is the fasting that I wish:
releasing those bound unjustly,
untying the thongs of the yoke;
Setting free the oppressed,
breaking every yoke;
Sharing your bread with the hungry,
sheltering the oppressed and the homeless;
Clothing the naked when you see them,
and not turning your back on your own.
Then your light shall break forth like the dawn,
and your wound shall quickly be healed;
Your vindication shall go before you,
and the glory of the LORD shall be your rear guard.”

Rich Brown is a writer, blogger, editor, and publisher. His most recent book is "Speak to the Bones: How to Be a Prophetic People in a Time of Exile" (Isaac's Press).
View all posts by Rich Brown →
This entry was posted in apocalyptic, future, judgment and tagged Crystal Cathedral, Gospel of Matthew, Last Judgment, Son of man (Christianity), The Sheep and the Goats. Bookmark the permalink.