The story of Jacob wrestling with a divine being served as the basis of a chapter in the 2001 Herald House book, Claimed by a New Name, which guided my denomination (Community of Christ) in a year-long discernment process. I wrote chapter 2, “Wrestling with God,” and served as the book’s editor. The complete article is archived at Isaac’s Press, with the first few paragraphs here. Discussion questions, which were included with the original, can be found at the archived location. 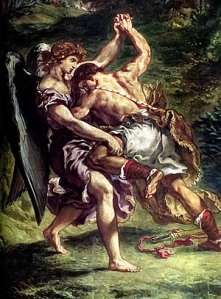 Jacob was left alone; and a man wrestled with him until daybreak. When the man saw that he did not prevail against Jacob, he struck him on the hip socket; and Jacob’s hip was put out of joint as he wrestled with him. Then he said, “Let me go, for the day is breaking.” But Jacob said, “I will not let you go, unless you bless me.” So he said to him, “What is your name?” And he said, “Jacob.” Then the man said, “You shall no longer be called Jacob, but Israel, for you have striven with God and with humans, and have prevailed.” Then Jacob asked him, “Please tell me your name.” But he said, “Why is it that you ask my name?” And there he blessed him. So Jacob called the place Peniel, saying, “For I have seen God face to face, and yet my life is preserved.” The sun rose upon him as he passed Penuel, limping because of his hip. –Genesis 32:24-31 NRSV

The titans struggled through the night, neither able to get an upper hand. As the morning mist evaporated over the Jordan one weary wrestler slipped away, as mysterious and unknown as before. The other limped into the dawn with a new name and calling, challenged to return home to confront a troubled past and an uncertain future. Only now could he–and countless heirs–claim and be claimed by God’s blessing.

Few Bible verses have been written about more than these. Some of that is due to the story’s open-endedness (like Jesus’ parable of the prodigal son, we’re left wondering what happened next to the brothers and the rest of the family).

There’s more to this name change than first meets the eye. People wanting to change their name today simply make application before a judge who can grant the new legal status. For ancient people, though, names were incredibly important, revealing much about character, purpose, and life’s calling.

And so this is not just a way to explain how a man named Jacob got a new name, “Israel.” It’s as much or more about the twelve Hebrew tribes named for his sons: who they are as a people, their relationship with God and other nations, and–perhaps most importantly–their divine calling as a “chosen people” through whom God’s will and eternal purposes were to be lived out.

That’s a lot to consider, of course, so before those complex issues can be dealt with, let’s back up and begin where Bible study rightly should begin: the story in the written text.

The rest of this article is archived here.

Rich Brown is a writer, blogger, editor, and publisher. His most recent book is "Speak to the Bones: How to Be a Prophetic People in a Time of Exile" (Isaac's Press).
View all posts by Rich Brown →
This entry was posted in doubt, Epiphany, generosity and tagged Genesis, Gospel of Matthew, Jacob. Bookmark the permalink.