For the next several months the Revised Common Lectionary focuses on major Hebrew prophets in its selections from the Old Testament (aka “Hebrew Scriptures”), beginning with a multi-week examination of Elijah. He’s a pretty good one to start with, if for no other reason than it shows that just because you don’t have your own “named book” in the OT, you can still be regarded as a major prophet.

This week’s passage from First Kings isn’t the earliest reference to Elijah (and over the next few weeks there will be earlier and later stories about Elijah) but it is certainly the best known: his dramatic confrontation with 450 priests of Baal (along with 400 priests of Baal’s female consort Asherah) on Mount Carmel. The writer of First Kings sets the stage:

Then you call on the name of your god and I will call on the name of the Lord; the god who answers by fire is indeed God.” All the people answered, “Well spoken!” Then Elijah said to the prophets of Baal, “Choose for yourselves one bull and prepare it first, for you are many; then call on the name of your god, but put no fire to it.” So they took the bull that was given them, prepared it, and called on the name of Baal from morning until noon, crying, “O Baal, answer us!” But there was no voice, and no answer. They limped about the altar that they had made. At noon Elijah mocked them, saying, “Cry aloud! Surely he is a god; either he is meditating, or he has wandered away, or he is on a journey, or perhaps he is asleep and must be awakened.” Then they cried aloud and, as was their custom, they cut themselves with swords and lances until the blood gushed out over them. As midday passed, they raved on until the time of the offering of the oblation, but there was no voice, no answer, and no response. –1 Kings 18:20-29 NRSV

Apparently Elijah had a bit of a sarcastic streak in him, considering the way he mocked the unsuccessful efforts of the Baal priests. But, of course, the point of this story has nothing to do with religious tolerance and ecumenical diversity. The prophet of Yahweh is concerned that Israel’s one, true, and only God is no longer regarded as such by the descendants of Abraham, Isaac, and Jacob. And so Elijah answered, not with theological arguments or sectarian debating points. No, this prophet got to work. And, boy, did he do some heavy lifting–literally!

Then Elijah said to all the people, “Come closer to me”; and all the people came closer to him. First he repaired the altar of the Lord that had been thrown down; Elijah took twelve stones, according to the number of the tribes of the sons of Jacob, to whom the word of the Lord came, saying, “Israel shall be your name”; with the stones he built an altar in the name of the Lord. 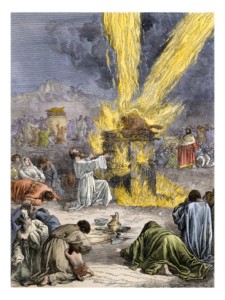 Then he made a trench around the altar, large enough to contain two measures of seed. Next he put the wood in order, cut the bull in pieces, and laid it on the wood. He said, “Fill four jars with water and pour it on the burnt offering and on the wood.” Then he said, “Do it a second time”; and they did it a second time. Again he said, “Do it a third time”; and they did it a third time, so that the water ran all around the altar, and filled the trench also with water. At the time of the offering of the oblation, the prophet Elijah came near and said, “O Lord, God of Abraham, Isaac, and Israel, let it be known this day that you are God in Israel, that I am your servant, and that I have done all these things at your bidding. Answer me, O Lord, answer me, so that this people may know that you, O Lord, are God, and that you have turned their hearts back.” –1 KIngs 18:30-37 NRSV

This must have been quite the sight. Hundreds of Baal priests dancing, singing, even ritually cutting themselves in an effort to show the power of their god, who they claimed controlled nature. And what was the result? “…there was no voice, no answer, and no response.”

Presumably, Elijah would have been pretty tired out after lifting those 12 heavy stones to build an altar, piling up a huge amount of timbers for a bonfire, and carving a bull! He at least had others drench the entire site with water three times, which under ordinary circumstances would ensure that fire would be an impossibility. Anyway, no singing, no dancing, no cutting himself. Just praying. But look at what prayer brought:

Then the fire of the Lord fell and consumed the burnt offering, the wood, the stones, and the dust, and even licked up the water that was in the trench. When all the people saw it, they fell on their faces and said, “The Lord indeed is God; the Lord indeed is God.” –1 Kings 18:38-39 NRSV

This might appear to be a whole lot of trouble to prove a point, but Elijah felt he needed to make it. There should be no room in Israel, he contended, for divided loyalty. Glorify God–and only God!

This story doesn’t end here, although the lectionary cuts it off at verse 39. The rest of the story begins with Elijah directing the people to seize the hundreds of Baal prophets and kill them. (This should remind us that all parts of the Bible are not appropriate bedtime reading before tucking our little children in for the night.) This, not unexpectedly, would infuriate Ahab’s Queen Jezebel, a Phoenician who actively encouraged Baal worship in Israel. But we’ll deal with those repercussions (for Elijah, Ahab, Jezebel, and Israel) in subsequent weeks. Maybe the chief takeaway from this week’s lectionary passage is not about a big, dramatic contest. After all, Elijah wasn’t trying to prove himself a true and mighty prophet to the people. His focus throughout was on God, to whom all glory and honor should be given.

This week’s bonus article: “The Death of a Church and the Rise of Something New,” by Sheri Ellwood

Rich Brown is a writer, blogger, editor, and publisher. His most recent book is "Speak to the Bones: How to Be a Prophetic People in a Time of Exile" (Isaac's Press).
View all posts by Rich Brown →
This entry was posted in Ancient Israel, covenant, Elijah and tagged Ahab, Baal, Book Of Kings, Hebrew Bible, Jezebel. Bookmark the permalink.