I’m quite sure I’m not the only one who has grown weary of Donald Trump’s babbling about all this birther nonsense. And I suspect, along with many others, that President Obama’s “real” birth certificate isn’t at the core of what Trump  really cares about anyway. Trump definitely has something up his sleeve and it most assuredly is not a reality-based plan to become President of the United States. His ego is much, much bigger than that.

No, Doubting Donald has already moved on now that the President has presented his birth certificate (which reveals–surprisingly!!!–exactly what he’s been saying all along) to expressing doubts about Obama’s transcripts from Columbia University and Harvard Law School. Of course, I’m just expressing my opinion here, but it appears Trump and all his crazy birther compatriots are actually most upset because they believe “someone like Obama” (an “Other” who doesn’t look like what the President of the United States, or for that matter a graduate of Harvard and Columbia Law, should look like) occupies the most important political position in the USA, if not the entire world. So, if you start at that end–what the President should look like–then you simply backtrack to find suitable questions to get people riled up.

Yes, I know: this is supposed to be a blog about religion, specifically about the scripture passages suggested by the Revised Common Lectionary for the Sunday after Easter. And it is, but if you’ll just bear with me a tiny bit longer, we’ll all get there.

You see, Doubting Donald is making all this noise not to prove that President Obama is–and is entitled to be–who he is. Trump is doing what he enjoys most (being squarely in the public eye) only to slyly intimate that the President is not “all that.” Certainly Trump has accomplices, not the least of which is Franklin Graham (the Reverend Billy’s boy and heir to the evangelist’s empire), but that particular piece of work is best saved for another day.

The day I’m concerned about is this coming Sunday, sometimes referred to by liturgical insiders as Easter 2. Last Sunday we had our fun, our big moment filled with uplifting sermons, shouts of “Alleluia,” and rousing hymns sung in congregations swollen by the ranks of once or twice-yearly Christians. But you can’t keep that kind of mountaintop high going every week (nor can we continually dwell in the valley of Good Friday either). 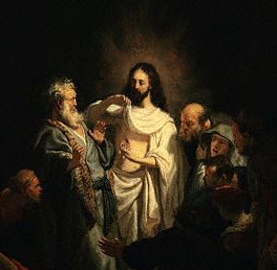 We return to reality, and thanks to the lectionary on all three years of its cycle the Gospel passage we encounter is the post-Resurrection story of Thomas. OK, most people refer to the poor guy as “Doubting Thomas.” I’m not the first to say that’s pretty much a bum rap on this close disciple of Jesus, who later became an apostle and is credited with, among other things, taking the message of Christ to the subcontinent of India. For that, and his fervent statement “My Lord and my God,” Thomas has always been revered in the Eastern branches of Christianity. Not so much in the West, though, which tagged him early and often with that “Doubting” moniker.

Thomas, though, is not so much a doubter (in other words, an “unbeliever” or an “unfaithful one”) as a realist. For some reason Thomas missed out on the meeting the risen Jesus had with the ten other remaining close disciples. Let’s pick up the Gospel writer’s account:

When it was evening on that day, the first day of the week, and the doors of the house where the disciples had met were locked for fear of the Jews, Jesus came and stood among them and said, “Peace be with you.” After he said this, he showed them his hands and his side. Then the disciples rejoiced when they saw the Lord. Jesus said to them again, “Peace be with you. As the Father has sent me, so I send you.” When he had said this, he breathed on them and said to them, “Receive the Holy Spirit. If you forgive the sins of any, they are forgiven them; if you retain the sins of any, they are retained.” But Thomas (who was called the Twin), one of the twelve, was not with them when Jesus came. So the other disciples told him, “We have seen the Lord.” But he said to them, “Unless I see the mark of the nails in his hands, and put my finger in the mark of the nails and my hand in his side, I will not believe.” A week later his disciples were again in the house, and Thomas was with them. Although the doors were shut, Jesus came and stood among them and said, “Peace be with you.” Then he said to Thomas, “Put your finger here and see my hands. Reach out your hand and put it in my side. Do not doubt but believe.” Thomas answered him, “My Lord and my God!” –John 20:19-28

Here are these ten frightened men hiding behind locked doors, fearing for their lives. (By the way, where are the women? Most likely, they’re out in public doing all the stuff that needs doing so the men can stay hidden.) The risen Jesus suddenly appears to them. Maybe his first “Peace be with you” is aimed at calming them down and relieving what must have been quite a shock. Then what does Jesus do? He shows them the nail prints in his hands and the scar in his side where a Roman soldier had poked him. It was only when they saw the physical evidence that the disciples rejoiced. Why should we be shocked and dismayed at Thomas for wanting exactly the same experience as his close friends in this first believing community. Contrary to what’s generally believed about this story, Thomas did not poke his fingers into Jesus’ side and hands. Instead he not only recognized his Master but immediately uttered what is arguably the foundation for all subsequent Christological statements: “My Lord and my God!” And for that he gets tagged with the name Doubting Thomas.

Two millenia later I grew up in a Christian congregation that, for the most part, equated doubt with a lack or weakness of faith. 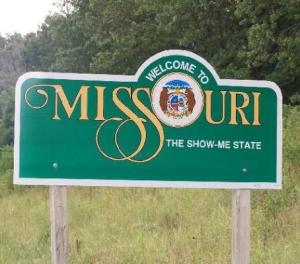 Granted it was the late-fifties and sixties and those folks were hardly the most intellectually curious group, even though they cared deeply for one another and held securely to the church they all loved. Perhaps oddly enough, this was in Missouri, the Show-Me State. One would think that would be one place where a realist like Thomas would be appreciated. (One would probably be wrong.)

I’m happy to testify that I both owe much to my childhood upbringing in the church and have managed to grow beyond–maybe even transcend–significant parts of it. That’s something about faith communities: they certainly aren’t perfect but they are necessary. I bet Thomas would have concurred.

Something tells me he also might have agreed with theologian Paul Tillich: “Serious doubt is confirmation of faith.” Nor is doubt the opposite of faith; and faith is not certain knowledge. As the writer of the Hebrews letter (11:1) aptly states it: “Now faith is the assurance of things hoped for, the conviction of things not seen.”

In a strange twist, this brings me back to Doubting Donald, his birther co-conspirators, and all the rest of their ilk. I suppose they, too, are convinced of “things not seen” and are most assured of what they’re hoping for: evidence that You-know-who is not really who/what he claims to be and is, in fact, an Outsider and Other and, therefore, an Imposter. They all work in an opposite direction from the Apostle Thomas, from hoped-for conclusion to irrational thesis.

We have much for which to thank Thomas, who first recognized in the risen Jesus our Lord and our God. As for Doubting Donald and the rest: Well, I suppose (to paraphrase another scripture verse: John 12:8), the nut-jobs and crazies will always be there.

Peace be with us.

Rich Brown is a writer, blogger, editor, and publisher. His most recent book is "Speak to the Bones: How to Be a Prophetic People in a Time of Exile" (Isaac's Press).
View all posts by Rich Brown →
This entry was posted in faith, hope, Jesus Christ, revelation and tagged faith, Gospel of John, Jesus Christ, resurrection, signs. Bookmark the permalink.